Sunday, July 13: This morning, a cool breeze wafts in through the cottage windows and I am of a mind to sleep in.  I always wake up at ungodly hours, and at 5 a.m., after tossing and turning for a bit, I peek out the window and see the beautiful light on the lake.  I grab my camera and head out to the dock in my pajamas.  The lake is tinged in pink and lavender, with reflections of the clouds on its surface.  I take some pictures and head back to fall into a dreamy slumber.

Last night, Alex and I decided we would leave this morning to go to Boston to visit his friend who is working there.  We thought we would stay the night in Boston since neither of us has been there.  But when the friend calls in the morning to say she can’t meet us after all, we decide to go ahead and leave anyway, as we told Ron and Betty last night that we were going to leave.

I think it might be fun to take a road trip through Vermont and New York, going home by way of Binghamton, New York and Harrisburg, Pennsylvania, so we don’t have to drive back on the busy east coast highways.

After we pack up, we head to Mount Major, where we can see a great view of Lake Winnipesaukee.

As we leave New Hampshire, the sun is shining, but soon after we cross into Vermont, the weather becomes quite dreary, with heavy clouds and intermittent rain.  This takes the luster out of our road trip.  Luckily, the sun pops out a bit as we stop in the cute town of Woodstock, Vermont.

We’re enticed into The Primrose Garden Gift Shop, because Alex and I both have his Nana on our minds.  Nana (Shirley to me) loves gardening and is in hospice care at home while we’re on this trip.  Alex decides he’d like to get her a gift from this cute little shop.  We find a kind of decorative bird’s nest with some blue speckled eggs inside and we decide she’ll like this.

When we go to the register to pay, we mention that we’re buying the bird’s nest as a gift for my mother-in-law, who is in hospice care and is declining rapidly.  I tell the woman behind the counter, “My son and I came to New England to take a little break.  We were invited to stay in someone’s cottage on Lake Winnipesaukee and now we’re making our way back home.”  The woman is surprised, “Oh, you’re his mother?  I thought you were something else.”

“Really?” I say.  “You don’t think we’re a couple, do you?”  This cracks me up because I had just asked Alex the day before if he felt uncomfortable traveling alone with his mother.   I asked, “Do you ever wonder if people think we’re a couple?” He laughed and said, “No way!”  I said, “Don’t be so shocked.  You know a lot of older women date younger men.”  He thought the whole notion utterly ridiculous.

So when this woman says this, he can’t believe it.  Actually, I think he’s mortified.  Poor Alex.  The woman goes on to say, “I really can’t believe you’re his mother.  You’re doing something right.  Whatever you’re doing, you should keep doing it.  You look great!”

We go on our way, leaving the little town of Woodstock and heading further south to Bennington, where we will stay the night.  We read online there are a lot of painted moose (which Alex wants to call “meese”) scattered around the town.  There is also a famous monument, apparently similar to the Washington Monument.  We vow to see the few sites there are despite the threatening weather.

We head straight for the Bennington Battle Monument, a 306 ft (93 m) stone obelisk that commemorates the Battle of Bennington during the Revolutionary War.  Sadly when we arrive, it’s too late to go to the top as it’s closing time.  The clouds and the light make it impossible for me to even get a good picture.  We do however find our first moose, painted in covered bridges.

We find our first moose painted in famous covered bridges from the area. 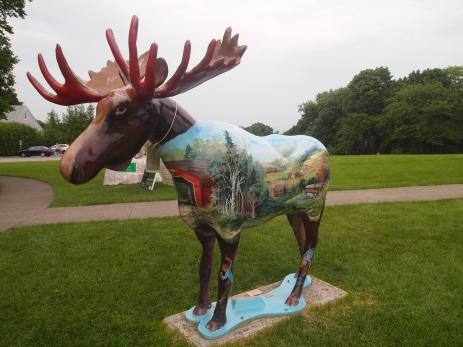 Covered bridges painted on the moose

Covered bridges painted on the moose

We find one painted cat near the monument as well.  Obviously, this town is really into painted animals.

As we’re driving into town, we come across a sprawling ruin of an old hotel, once the Walloomsac Inn and Dewey Tavern.  It looks like a haunted house, but when we ask someone walking down the road what it is, they tell us one of the owners still lives in a portion of the house.

On June 4, 1791, Thomas Jefferson and James Madison stayed at Dewey Tavern, while on a tour of the northern states.  After Elijah Dewey’s death, the Dewey Tavern became the Walloomsac Inn.

Across the street from the ruined inn is the Old First Congregational Church and the Old Bennington Cemetery.

The cemetery goes back to the American Revolution.  The poet Robert Frost is buried here.  He bought the plots in 1940 because of its mountain view, not surprising as he had a home in Franconia, New Hampshire and three farms in Vermont.  He also wanted to be buried behind a beautiful old New England Church.

Frost has been said by many to have been an atheist and scholars still argue about his religious beliefs. Though his poetry often alludes to the Bible, he was skeptical.

Frost’s gravestone of Barre granite with hand-carved laurel leaves is inscribed, “I had a lover’s quarrel with the world.”  It’s also sprinkled with pennies.

Finally, after we have dinner, we drive around the town in search of more moose.  We find an array of the painted creatures in various spots around town. 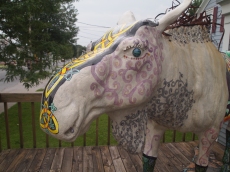 front view of a moose

Finally, we head back to our hotel as it has started raining and getting dark all at once. We pass by the catbird studio, where Alex has to take a picture.

There is nothing else we can find to do in this town, so we go back to the Paradise Inn and relax after our long day in the car.

Tomorrow we’re hoping for better weather so we can take a hike in the Catskill Mountains of New York.