Saturday, December 24:  Mike, Alex and I drive on this overcast Saturday to the Washington National Cathedral for our annual Christmas Eve visit. We’re a small group this Christmas, as Adam is body-surfing at a beach in Maui and Sarah is hanging with her dad, his two pugs, her dog Bagel, her stepmother and half-brothers in Virginia Beach.

In the Cathedral’s nave, we admire an owl hidden in a Christmas tree amidst poinsettia and cranberry garlands, and columns decked out in red-bowed wreaths.  We crane our necks to admire the Space Window, celebrating the Apollo mission to the moon, and the three Rose windows and all the stained glass scenes that bring the stories of Christianity to life.

I light a candle and pray for peace and love, for healing in our country after our divisive election and under our upcoming regime change, for the Syrian refugees and other people suffering because of war and famine and corruption, and for my children, who I hope will someday thrive. I also pray that I can find my quest, my own personal legend, in my life.  I squeeze a lot of hope into that one candle. 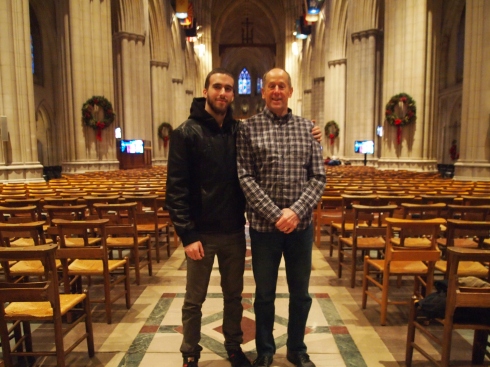 Mike and Alex in the Cathedral 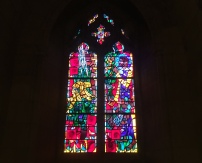 stained glass at the Cathedral

The Canterbury Pulpit depicts people and scenes relating to the Bible’s translation into English.  Stories for the pulpit came from Canterbury Cathedral in England.

We find the Pentagon Cross, made by Alvin Neider from fragments of the facade of the Pentagon after the attacks of 11 September 2001, in recognition that we are “united in memory, freedom, and faith, and in the hope of and love for God, our nation, and all peoples of the earth.”

We find HOLY CITY, a pilgrimage of sight, by Irish citizen Brian Whelan, a nine-paneled painting showing “a vision of unity amongst the three Abrahamic faiths, Christianity, Islam and Judaism.”  Says the artist: “The daily news is full of stories of faith against faith; a never-ending holy war and perversion of God’s love.  Wars, conflicts and acts of terrorism are often described with religious labels.  This is not a perspective shared by most people.  Across the faiths, we have far more in common that divides us.”

The artist says this doesn’t depict any one Holy City that exists in today’s world: “This is my aspirational vision of what a Holy City looks like.  Each of the canvases contain churches, mosques and synagogues, representing the Abrahamic faiths, painted in bright, playful and colorful forms.  An abstracted, disarming vision of cultural unity; living together in peace, acceptance and in harmony; a haven for the soul. … In this Holy City, hospitality would be offered to all pilgrims.”

For close-ups of the nine panels of Holy City, click on any picture in the tiled mosaic below. 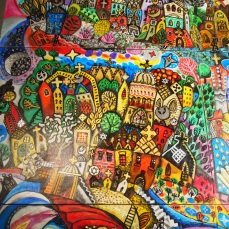 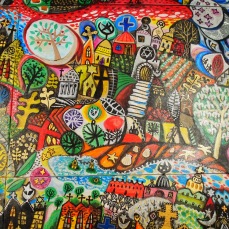 In the Crypt level, we visit the Bethlehem Chapel, showing the genealogy and birth of Jesus, and the Chapel of St. Joseph of Arimathea, telling the story of Jesus’ entombment following his crucifixion.

The main reason we come to the Cathedral on Christmas Eve is to see the crèches from all over the world.  We see nativity scenes made from natural materials found in Mexico, India, Kyrgyzstan, Latvia, New Mexico, Arizona, Turkey, Uganda and others. 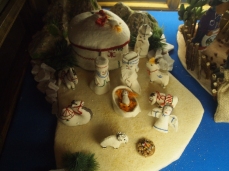 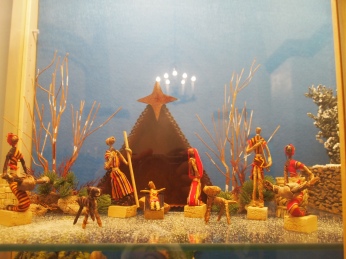 In the Jamaican nativity, the bodies are made of rolled woven mats with painted gourds for heads.  They are dressed in woven fiber and fabric garments.  The figures’ eyes are painted with touches of gold, which make them glow.  As for the Wise Men: one Magi is from Africa, one from Asia, and one from Europe, each wearing elaborate fiber headdresses that represent their home continents. 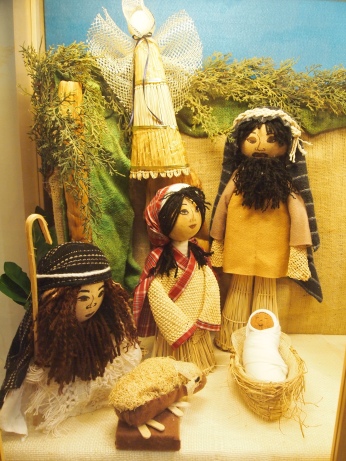 The bodies of the figures in the Singapore nativity are made from the trunk of the cinnamon tree.  While the bark is ground into cinnamon, the trunk is ground into a powder and mixed with water to form a soft dough.  The figures are then formed on a wire armature.  The entire process takes anywhere from 2 1/2 – 15 hours, depending upon the intricacy of the figure.

Finally, a crèche made of wood depicts the traditions and cultures of Alaska.  The figures of Mary, Joseph and the Christ Child sit within a lodgehouse, which is set on poles to store winter provisions.  Mary is dressed in native garb, while Joseph is dressed as a Russian settler.  On the roof is a star, and a snowy owl rests nearby, representing an angel.  The animals include a caribou, a walrus, a puffin, a moose, a polar bear, and the Alaskan state bird, the ptarmigan.  Native plants are represented by the spruce tree, the fuchsia fireweed, which grows profusely along Alaskan roadways, and the Alaskan state flower, the forget-me-not.  A totem pole completes the scene.

The Resurrection Chapel is decorated with colorful mosaics, portraying the appearances of Jesus after his resurrection. 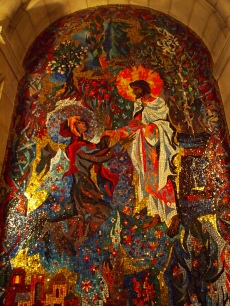 Mike and me at the Cathedral 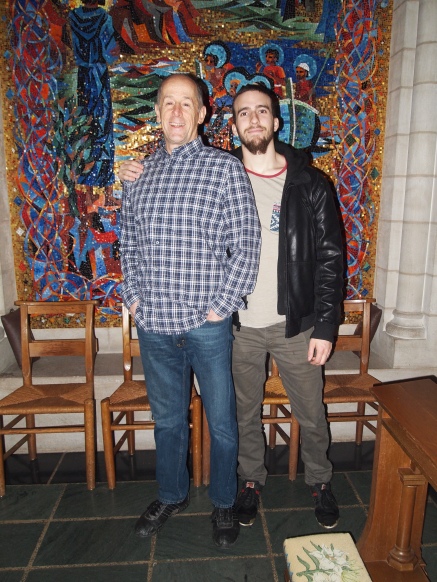 Outside, we take some parting shots of the Cathedral and then drink coffee and tea in the gift-shop-turned-cafe, amidst steam, hissing and the chatter of other pilgrims.

The Bishop’s Garden is modeled on a medieval walled garden and features herb and rose beds.

On the way home from our visit, we stop at the Lebanese Taverna market, where we eat a smorgasbord of kibbeh, sambousick, fatayer cheese, arnabeet, loubieh, and fattoush. I pick up a few stocking stuffers at the market here.

Back home, after wrapping our remaining presents and preparing the chicken apple sausages for tomorrow’s Christmas brunch, we meet my sister-in-law Barbara and a friend of hers at Luciano Italian Restaurant and pizzeria for Christmas Eve dinner.

Though we’ve never done this in Christmases past, we attend my sister-in-law’s 8:00 church service at the Unitarian Universalist Congregation of Fairfax, where she sings in the choir.  We hear a wonderful and moving rendition of “Ave Maria” that brings tears to my eyes.

We spend some time at Barbara’s house for gift exchange and good cheer, and then return home, where we bid goodnight to our Christmas tree. 🙂

ornament on my tree

ornaments on the tree 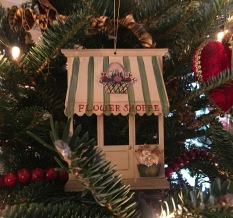 In the morning, in our typical Christmas fashion, we open our gifts one by one, and we have the same Christmas brunch I got from a 1992 issue of Martha Stewart Living and have been making for nearly 25 years (except the years I was abroad, when my family made the same brunch): Breakfast Frittata, Chicken Apple Sausages, Cheese Grit casserole, pancakes with cranberry maple compote, mimosas, and Barbara’s addition of a fruit salad with an orange sauce.

A good but quiet Christmas all around.