Saturday, July 26:  Last night, a day after my mother-in-law’s memorial service, Mike and I were watching the French movie, Delicacy, when suddenly we heard Bailey, our 12 1/2 year-old Border Collie, get sick.  Mike said Bailey had been more lethargic than normal on his evening walk, but at his age, 88 in human years, that was not so abnormal.

Later in the night, Adam and his friends were hanging out in the basement.  Adam told us in the morning that Bailey had thrown up about four times.  Each time, Adam gave him water, which Bailey drank right up.  Then he’d throw up again.

On Saturday morning, we found Bailey lying in the basement sewing room, far removed from all the activity, his heart beating rapidly and his chest heaving as he tried to breathe.  He looked scared and wouldn’t move.  Alex picked him up and carried him to the van, and Mike and the boys took him immediately to the vet.  The only thing we could think of was that he had eaten something out of the compost pile yesterday that might have made him sick.  Mike and the boys stayed with him a while, but the vet recommended they go home as he said it would take some time for a diagnosis.  They left him with the vet, who took x-rays and found some kind of mass in his chest.  Blood work showed his blood wasn’t clotting.  Before any final determination could be made, the vet phoned to say Bailey was declining, and he recommended putting him down.  We all jumped in the van as quickly as possible, but before we got out of the neighborhood, the vet called.  Bailey had died.

We were so sad not to have been by his side, as he was a dear member of our family.  All we could hope was that he wasn’t too scared all by himself in his last moments.

Sometimes it seems bad things happen in groups.  I say they happen in threes, Mike says in twos.  He remembered how his father died of a sudden heart attack in 1999, a couple of days after Mike fell off a ladder and broke his arm. This time, my mother-in-law, Shirley, was admitted to the hospital on June 30 with a bad cough and pneumonia and released to go home under hospice care two days after her 88th birthday on July 1.  She died on Thursday, July 17.  We had her memorial service on Thursday, July 24.  And then Bailey died two days later at the human age of 88 (12 1/2 in dog years). 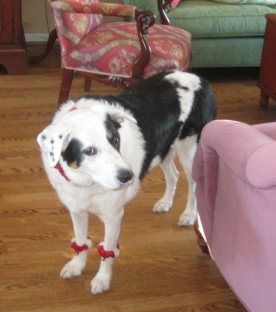 Bailey decked out in Santa bells 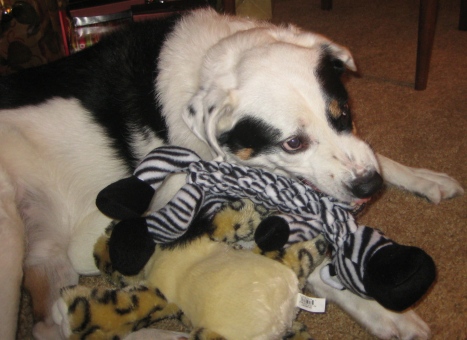 Bailey and his Christmas stuffed animals

Bailey on a hike 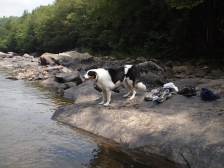 Mike tosses the ball to Bailey in our front yard

Alex works out while Bailey keeps him company

Bailey takes a breather on a hike

Bailey wondering at his hand-standing brothers

He loved to chase sticks

Me & Bailey at Stribling Orchard

Somehow, I can’t help but think there is a connection between Shirley’s death and Bailey’s.  Shirley loved Bailey as if he were her own dog.  When she came home from the hospital, she mysteriously had a soft golden teddy bear which we’d never seen before.  She said someone from her Garden Club had given it to her.  She called it Bailey and kept it by her side in her last weeks.  In those last weeks, she also asked Mike several times to bring the real Bailey by to see her, which he did.  She was always happy to see him.

Did Bailey sense that Shirley needed a companion in her death?  Was it just coincidence?  They were both 88.  Shirley had that bear named Bailey that never left her side.  Maybe 88 is just a good age to go.

The vet told us we could take Bailey home to bury him in our yard.  We have a corner garden, and Adam wanted to bury him there and plant a fig tree over him.  Bailey ruled that corner of our yard.  It was probably annoying to many people, but whenever anyone walked by our yard, Bailey ran up and down the property line barking at them.  Most people knew he was harmless, but I think he might have made some people a little nervous.

Mike and the boys dug a 5-foot-deep hole in the garden, which took them several hours in the hot sun.  It was a grueling effort, and I kept them supplied with ice water.  We put Bailey’s body in the hole with Shirley’s teddy bear, Bailey’s favorite squeaky football, and some of the flowers from Shirley’s funeral.

Later in the evening, Mike’s sister Barbara came over, we all went out to dinner at East West Vietnamese restaurant and made a toast to Bailey.  Then we came home and had a little ceremony over Bailey’s grave and fig tree, where we tossed all the flowers from Shirley’s funeral over his grave.  We felt overwhelmed with sadness.

As a Border Collie, Bailey was a heart a sheep-herder and an alpha male. He liked to round up smaller dogs and he liked to be in charge.  He liked to rule his territory.  But he was a scaredy-dog at heart.  If another dog challenged him, he’d go cowering into a corner.

Tools made him bonkers.  He went ballistic whenever we used the vacuum cleaner.  He would attack a broom with his teeth bared.  Whenever we brought out the blender or a corkscrew, or our onion chopper, he could hear from another room that we were going to use them, and he’d come in barking, upset that anyone would dare use tools such as these in his presence.  We finally trained him to sit while we used those tools, but he’d whine the whole time.

We use a tool when we put a rubber cork into open wine bottles;  that tool suctions the air out of the bottle and seals it.  No matter how quietly I tried to do that task, I’d hear the pitter-patter of Bailey’s toenails on the wood floors as he skittered into the kitchen to bark or whine.

He loved to hang out with the boys, with me, or with Mike, as we sat reading or working or doing an outdoor task.  When Mike took him on his evening walks, he’d sniff the pee-mail left by every dog in the neighborhood, and he’d send secret messages back. He obviously had an active social life.

We’ll miss his quirky personality and his presence in our family. But I hope he’s now keeping Shirley company in a happier place.

24 thoughts on “goodbye to bailey”