Saturday, December 28:  This afternoon we head downtown to the United States Botanic Garden.  Beside the Conservatory is a garden called Bartholdi Park, where we catch some interesting views of both the conservatory and the U.S. Capitol, along with some berries, dried flowers and a famous fountain.  Bartholdi Park is named for French sculptor Frédéric Auguste Bartholdi, who is best known for designing the Statue of Liberty.  He was actually working on the Statue of Liberty at the same time he was creating this fountain, originally called the “Fountain of Light and Water.”  The fountain was completely restored and modernized in 2011 as part of an ongoing effort at the U.S. Botanic Garden to demonstrate the best practices in gardening, energy efficiency, and effective use of natural resources.

Click on any of the photos below for a full-sized slide show. 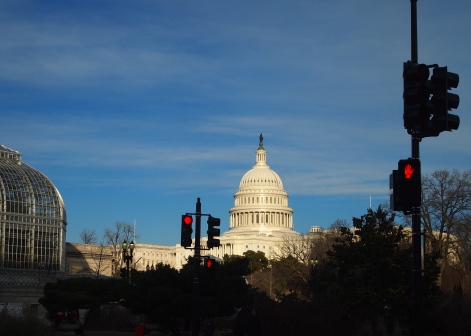 the U.S. Capitol from Bartholdi Park 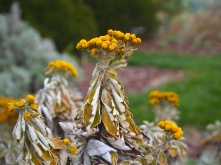 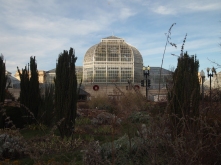 Bartholdi Park and its fountain

views of the U.S. Capitol through orange berries

the Bartholdi fountain and the Conservatory

We’re surprised to find a long line to get into the Conservatory.  Luckily, we don’t just mindlessly get in the line.  I walk up to the front entrance to scope out the situation and find the line is for the model train exhibit.  We don’t care about the model trains, so we bypass the line and head directly into the conservatory, where there is no escape from the hordes of people.  Just inside the main entrance is the Garden Court which features replicas of the reflecting pools and important Washington buildings, including the Capitol, the Lincoln and Jefferson Memorials, the Washington Monument, the Smithsonian Castle and the White House. 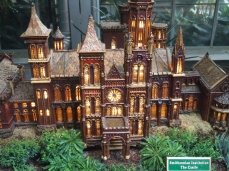 We head further back into the Conservatory to the World Deserts, filled with succulents, grasses, shrubs and other flowering plants. 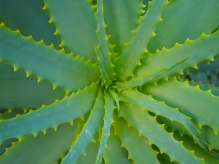 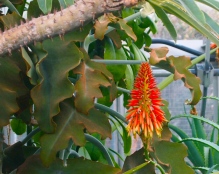 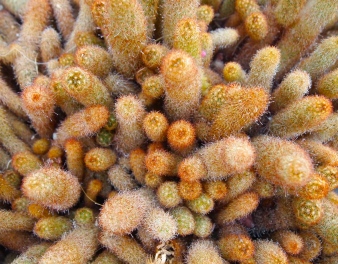 We wander, sometimes stuck at a dead standstill because of the crowds. In the Garden Primeval, we find a reconstructed Jurassic landscape of ferns and other ancient plant groups that have survived for 150 million years. 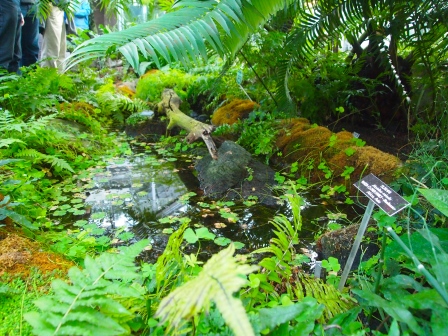 through the Garden Primeval 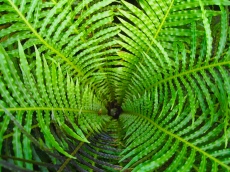 ferns in the Garden Primeval

in the Garden Primeval

In the Orchids area, we find a beautiful display of mythic plants. The Botanic Garden’s orchid collection numbers about 5,000 specimens, with hundreds on display at any given time.  Sadly, I can’t take many good pictures because the of the waning light. 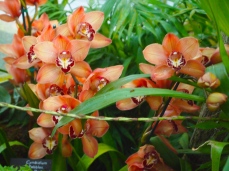 We stroll through the Jungle, a tropical rainforest that overtakes an abandoned plantation. The Conservatory dome rises to 93 feet and has a mezzanine level from which to view the jungle canopy.  Adam decides not to go up on the metal catwalk because he did a case study in an engineering class where a metal catwalk collapsed, and he feels there are too many people on it.  Mike, Alex and I go up despite Adam’s warnings.  It’s really only crowded in one area; once we bypass the crowd, it’s much more sparsely populated. Lucky for us, we survive the dangers. 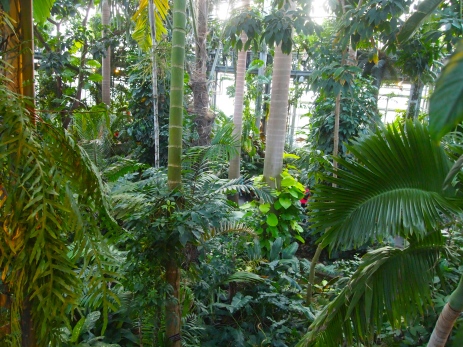 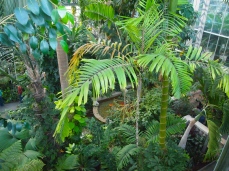 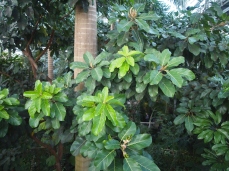 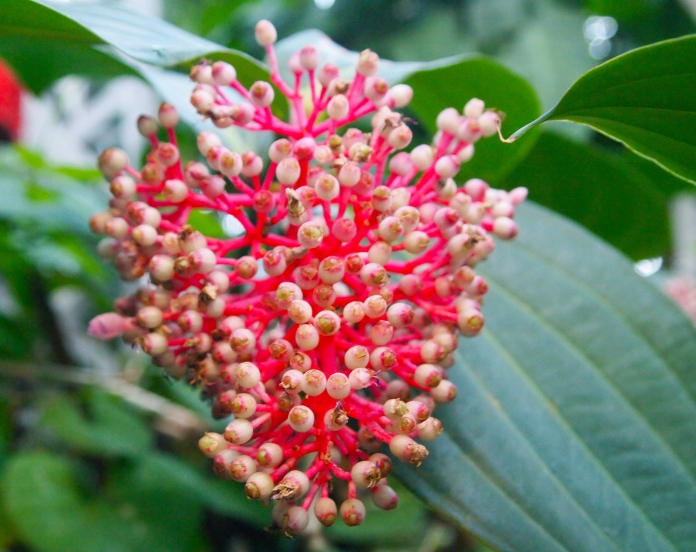 Finally, we head outdoors to take a walk past the U.S. Capitol.  It isn’t often I see it in blue light.  A big Christmas tree is twinkling a rainbow of colors on the lawn and crowds of people are milling about everywhere.  I guess because the temperature is a rare 54 degrees today, people have decided to come outdoors in droves.

Alex is doing his normal hand stands everywhere, and a woman walking beside us says to him: “Stop showing off!” She tells of her Danish grandfather who could do hand stands up the stairs in his younger years; he continued doing hand stands until he was 90. He was such a character that he used to lie on his balcony at his nursing home in the nude because he said he “needed the sun.” He lived to 96. I think Alex is hoping to be doing hand stands until he’s 90. 🙂

Mike, Adam and Alex at the U.S. Capitol 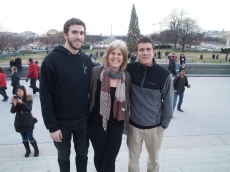 Alex, me and Adam 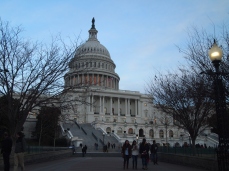 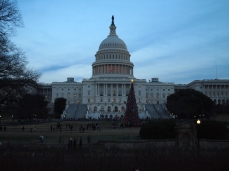 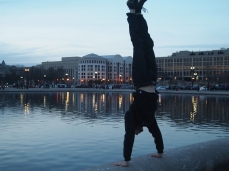 Alex lines up with the reflections

“Heroic Shorepoints I” at the Hubert Humphrey Federal Building

We head to a small dive of a bar, called Space Bar, in Falls Church that’s known for “two dozen taps + infinite grilled cheese.” Baffled, I look at the beer menu and don’t have a clue what to order.  I usually drink Bud Light Lime, which some people would argue isn’t beer at all.  We have to order at the bar, so Mike goes up and tells them, “My wife is looking for a girly beer that is very light, something along the lines of Bud Light Lime.”  The bartender recommends a Sly Fox Royal Weisseale, which I would describe as similar to a Blue Moon (which I also like).  Beeradvocate describes it as having “flavors of banana and cloves with an often dry and tart edge, some spiciness, bubblegum or notes of apples. Little hop bitterness, and a moderate level of alcohol. Poured into a traditional Weizen glass, the Hefeweizen can be one sexy looking beer.” Wowzer!

The boys are now both of legal drinking age, so they both order Great Divide Yeti Imperial Stouts. According to Beeradvocate: Russian Imperial Stout, this is the “king of stouts, inspired by brewers back in the 1800’s to win over the Russian Czar.”  It boasts “high alcohol by volumes and plenty of malt character… with huge roasted, chocolate and burnt malt flavours.”

Adam takes a drink of his Yeti and makes a contorted face. I sip it as well; I want to immediately spit it out.  Adam says, “That tastes like Star Wars.  I mean it tastes like literally eating a DVD of Star Wars.”  I can’t help but laugh out loud, because it’s so off the wall, but so true.

The menu at Space Bar is all grilled cheese sandwiches, as they say, of infinite variety.  I enjoy every bite of my grilled Portobello & red onion and garlicky spinach with Havarti and cheddar on rye.  I’m glad it’s about time for New Year’s Resolutions, because I need to change my bad eating habits and try to get in shape in the coming year. 🙂